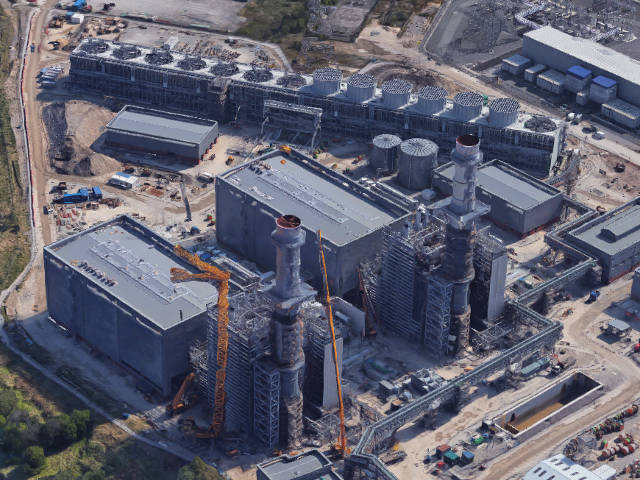 Under Construction: how Google Maps showed the gas power station whilst under construction (Courtesy of Google).

Yesterday (13 March 2017), Carrington’s new gas power station was officially opened by Junior Energy Secretary, Jesse Norman. The new power station was built on the site of the former coal fired power station which closed in 1991. At 884 MW, it generates four times more electricity than its predecessor ever did.

The gas power station, owned and operated by ESB – the Republic of Ireland’s nationalised electricity company – cost £710 million to build. It began operations in September 2016, providing electricity to one million homes and businesses in and around Greater Manchester.

Prior to its opening last September, gas turbines were ferried from Ellesmere Port to Carrington, via the Manchester Ship Canal. This reduced the environmental impact of its construction. With the parts ferried by boat instead of road, this was a more effective option than using nearby motorways and arterial roads.

Planning permission for the gas power station was granted by the Secretary of State for the Department of Business, Enterprise and Regulatory Reform in July 2008. Its construction created 900 jobs with its workers ferried to the site from a temporary park and ride scheme by bus. The power station has 40 members of staff.

The ESB Group was founded in 1927 as a state owned electricity supplier for the Republic of Ireland. They are a bit like the National Grid, the Central Electricity Generating Board, and NORWEB of old. Carrington Power Station is also close to the original home of the National Gas Archive, prior to its move to Warrington.